During 2006, BUSAR has become as a legal unit under the university and operated as a Civil Defense Group. By 2015, BUSAR has become a non governmental / non profit volunteering based Search & Rescue Association, taken the name of Besiktas Urban Search and Rescue in order to be part of AFAD’s SAR organizations, nationwide exercises and training programs. BUSAR Association members are actual Bahcesehir University Students originating from the student club. When completed necessary trainings, students are eligible of becoming association members.

Orienteering training has been exercised against time in Istanbul’s Belgrad Forest Preserves on Dec18, 2016.

Applications have started for driving on snow, search & rescue under heavy weather trainings. You can apply thru or just fill out the membership form.

2017 Sea Search &  Rescue Training program will be announced in January. Pre-applications have started via email:

Search & Rescue training in wild nature has been completed at Istanbul Belgrad Forest Preserve on Dec 04, 2016.

Evaluation of the wreckage and technical approach, Search & Rescue training under wreckage with heavy machinery has been completed with 37 participants at Istanbul Cavusbasi Wreck Training Zone. Nov 27...

WANT TO BECOME A BUSAR VOLUNTEER 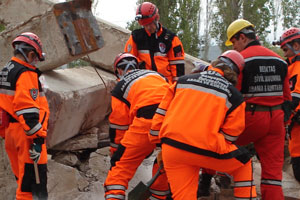 FOR DONATION AND SUPPORT

If you would like to support our association, you may do so by using online banking. Please click for more information

You may find how to be supporter with the link provided.